Artificial intelligence (AI) is widely considered the future of programming and application development. With its ability to automate certain tasks, improve the efficiency of development and standardize processes, AI has the potential to impact the way programmers and developers work significantly. We’ve been talking about the widespread use of AI for a long time. Still, a while ago, its use became almost commonplace enough to start a discussion and the threat it poses in terms of eliminating humans from doing much creative work, like even creating fantastic art. The development of AI will undoubtedly affect programming and application development.

Is artificial intelligence a threat and a widespread fear of security breaches or a blessing of the current times?

The Benefits of AI in DevOps

One of the primary ways AI can impact programming and application development is through DevOps, which combines software development and IT operations to deliver software updates and enhancements more efficiently and effectively. One of the potential benefits of using AI is the ability to automate certain tasks that are time-consuming or otherwise difficult for humans to perform. For example, AI algorithms can analyze large amounts of data and identify patterns or trends that may be difficult for a human developer to see. AI can be used in monitoring through machine learning algorithms to analyze log data and identify patterns that may indicate an issue with a system. For example, a machine learning model could be trained on a dataset of log data from a web application and then be used to predict when the application will likely experience performance issues or errors. This prediction can trigger an alert to a DevOps team, who can take proactive measures to prevent the problem from impacting users. Another way that AI can be used in monitoring is through natural language processing (NLP) to automatically classify and prioritize issues based on the severity and impact of the system. For example, an NLP model could be trained on a dataset of past problems and their corresponding implications and resolution time and then be used to categorize and prioritize new issues as they arise automatically. It can help a DevOps team to triage and resolve issues more efficiently and ensure that the most critical problems are addressed first.

AI can be successfully used in security to automate the detection of DDoS attacks and suspicious activity. A DDoS (distributed denial of service) attack is a type of cyber attack in which an attacker attempts to make a website or network resource unavailable to users by overwhelming traffic from multiple sources. Also, to automate the detection of DDoS attacks by analyzing network traffic patterns in real-time and identifying anomalies that may indicate an attack is underway. For example, an AI model could be trained on a dataset of standard network traffic patterns and then be used to identify deviations from these patterns that may indicate an attack is in progress. Once an attack is detected, the AI system can automatically alert security personnel.

It can be beneficial in tasks such as debugging, where AI algorithms can quickly identify and fix problems in code that a human programmer might spend hours or even days locating. AI has major trouble detecting business errors in the code, and its usefulness is mainly limited to detecting procedural errors in code (like forgetting to release a file descriptor, etc.). Analyzing data is fine; that is the most common use case, but placing debugging in the second place feels odd, especially given the early but impressive results we can get from automated code generation tools like GitHub Copilot, ChatGPT, etc.

It might be of huge value when companies’ budgets are tight and the number of specialists in the job market is also limited. In addition to streamlining certain tasks, AI can also be used to improve the overall efficiency of the development process. For example, AI algorithms can be used to optimize code for faster execution or to identify and fix problems in real-time as they occur. It can help developers save time and effort, leading to more robust and reliable software. 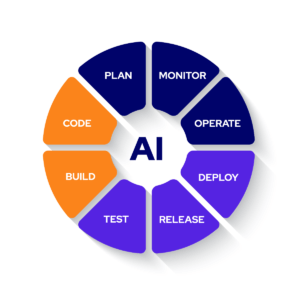 AI can also improve the speed and accuracy of DevOps testing and deployment processes. For example, AI algorithms can analyze test results and identify patterns or trends that may indicate software problems. It can be helpful for developers to identify and fix problems more quickly, ultimately leading to more reliable software updates and enhancements. However, at this stage in the development of artificial intelligence, would we allow humans to be eliminated and all code to be written and systems security to be based on it? I don’t think so.

The Risks of Using AI in DevOps

Despite the potential benefits of using AI in DevOps, there are also risks associated with this approach. One of the primary concerns is the potential for security breaches, as AI algorithms can be vulnerable to hacking or other cyberattacks. That could result in the theft of sensitive data or unauthorized access to sensitive systems, with significant consequences for individuals and organizations. Another potential risk is that AI algorithms can make mistakes or take unexpected or unintended actions. For example, an AI algorithm designed to optimize code could make changes that negatively affect the overall performance of the software, or an algorithm designed to predict user behavior could make inaccurate or even harmful predictions. Finally, there is also the risk that AI algorithms may be biased or unfairly favor certain groups of people over others. It can occur if the data used to train the algorithm is partial or unfairly favor particular groups. In human hands, AI will create a reality formed by our expectations and visions.

Strategies for Mitigating the Risks of Using AI in DevOps

Given the potential risks associated with using AI in DevOps, developers need to take appropriate precautions to ensure that AI is safe and beneficial for all stakeholders. Some strategies for mitigating these risks include:

Artificial intelligence has the potential to affect programming and application development, particularly using DevOps, greatly. AI can automate certain tasks, improve the efficiency of the development process, and enhance the software’s capabilities. AI is very flexible and can be used in many fields, such as medicine, transportation, finance, education, etc. It can also create new technologies and solutions previously impossible or difficult to achieve. Is there a risk today that artificial intelligence will displace developers and replace each in programming and application development?

The role of humanity in DevOps is crucial and should be defended. Despite technological advancements, there are certain areas where human expertise is still needed. However, it’s important to acknowledge the evolution of DevOps in recent years, specifically the increasing use of AI systems that can take direct actions in response to stimuli. Fully automated systems are already in place and being utilized by various providers.

In conclusion, as technology continues to advance rapidly, we must consider the role of human expertise in the future. By identifying the areas where human experience will be critical, we can ensure a healthy balance between human and machine capabilities. This includes defining the business logic for automated tools using AI, and treating these services as building blocks for creating comprehensive solutions. However, it’s important to note that the idea that humans are needed for tasks like mixing concrete needs to be updated. We have already surpassed the need for manual labor in simple tasks such as input IP addresses to block or monitor access logs or files uploaded to cloud drives. Instead, we will be needed to create tailored security solutions that meet a company’s specific needs, which AI systems are currently not advanced enough to do. We need to understand that the role of humans in the future will be to oversee and provide guidance to machines rather than to perform menial tasks that can be easily automated. Doing so can create a symbiotic relationship between humans and machines, where each complements the other’s strengths and weaknesses, leading to a more efficient and effective solution overall.

Why SecDevOps is important for Start-ups

To answer the question if SecDevOps solutions are beneficial for a start-up is first worthwhile to have a good understanding of the definition of such a...

Blockchain is not a new topic, but it is often not understood selectively. There are many myths and misunderstandings about blockchain. The term itself,...

What is a monolith? How to work without conflicts on large applications? In the following article, I will describe what micro frameworks are and how to...