Companies operating in the energy sector know very well that changes that are inevitable do not come easily. Changing the approach to production, distribution and process management requires time, work, and the ability to lead the company to a different – digital reality. Digital transformation is not only a slogan, it’s a change in company management and profit optimization.

Following the data cited by Chapter 247, a successful digital transformation must be able to save 40% of the overall costs, anything less will be inefficient for the entire organization. Deloitte’s latest study also confirmed that there exists a strong connection between the digital maturity of an enterprise and its net revenue and net profit margin. If your company can increase income by following transformation which is no longer a trend but a basic need, why not check for the energy industry.

On the map of companies from the energy industry that have taken up such challenges is, among others, Shell. This global player focused on the digital transformation of the energy industry many years ago. The main purpose of its introduction was to improve efficiency and safety as well as the increased use of renewable energy.

Machine learning and artificial intelligence have become an important element in the construction of the new Shell strategy, which optimizes all possible operations in order to obtain higher revenues and reduce losses. The digital transformation, as Shell bosses themselves admit, changed the company’s business model.

Shell has relied on automation, digitization and IoT to improve well performance, operational efficiency and safety in all of its oil and gas operations.

Drones are used in daily monitoring and supervision. Monitoring, for example, minor leaks or faults. Their speed of movement and the ability to penetrate places difficult to reach for humans, allowed the company to avoid serious failures or faults, reacting quickly and efficiently to even the smallest signals. For Shell, drones are a key factor in optimization and protection against all kinds of losses.

Long road trips take valuable man-hours from workers who have to travel great distances. Drones will reduce the number of operators on the roads, thus also reducing the risk related to road safety and the effects of potential accidents. It’s worth mentioning that Shell-Avitas Systems – the company’s drone development program – has been operating dynamically since 2018.

Shell, as one of the leaders in digital transformation, also relies on IoT. According to data from only 2021, Shell has managed to make savings of over $ 1 million by using IoT devices to monitor oil fields. How did they do that?

It turns out that Shell has deployed sensors in its pipelines, manufactured by Koncar Inem in Nigeria. This was done as a part of the Digital Oilfield project. It combined IT automation and tooling technologies to provide a support platform for remote field data and optimize operations. Additional savings also came from the implementation of Ingenu’s Random Phase Multiple Access (RPMA) communication platform, with low power consumption, requiring no investment and only minimal infrastructure. Reliable data transmission with proper monitoring completed the work and maximized profit while minimizing losses caused by lack of supervision.

Having so many sources of information, rapid analysis capabilities and data storage allowed Shell to improve production efficiency by 2 to 10 percent and to improve costs by 10 to 30 percent. What exactly are these amounts? According to Shell calculations, this saves up to four cents per kilowatt hour in energy and between $ 2 and $ 12 a barrel in oil and gas extraction. This may allow Shell to build a competitive advantage on the market. Impressive results!

But Shell is not the only example of how the digital transformation in the energy sector can have a positive impact on the company’s financial condition and build a competitive advantage. Another is DNV, which defines itself as the world-leading provider of digital solutions.

At DNV, all activities are aimed at the transition to a low-carbon energy system.

Like Shell, DNV views digital transformation as an important business process. It is part of the company’s strategy and value, thanks to which it is able to respond to dynamic changes in the energy market.

The company takes these changes seriously enough to conduct research with nearly 200 global specialists from the entire energy chain, which allows the company to identify which digital technologies work best in a given segment. IoT or blockchain technology as a potential means of a new approach to trading and supplying energy cannot be separated from specific needs. Digital transformation cannot be an end in itself and should support the long-term goals of the entire energy industry. You can read more about how DNV implements digital transformation as a market leader in the report: ‘Digitalization & the future of energy: Beyond the hype – how to create value by combining digital technology, people and business strategy’.

The report made it possible to understand how important it is for companies in the energy sector to implement digital transformation in companies. They see transformation as profit on many levels. Improving efficiency or the possibility of creating new products, which in the long-run has a real impact on the financial condition of the company. 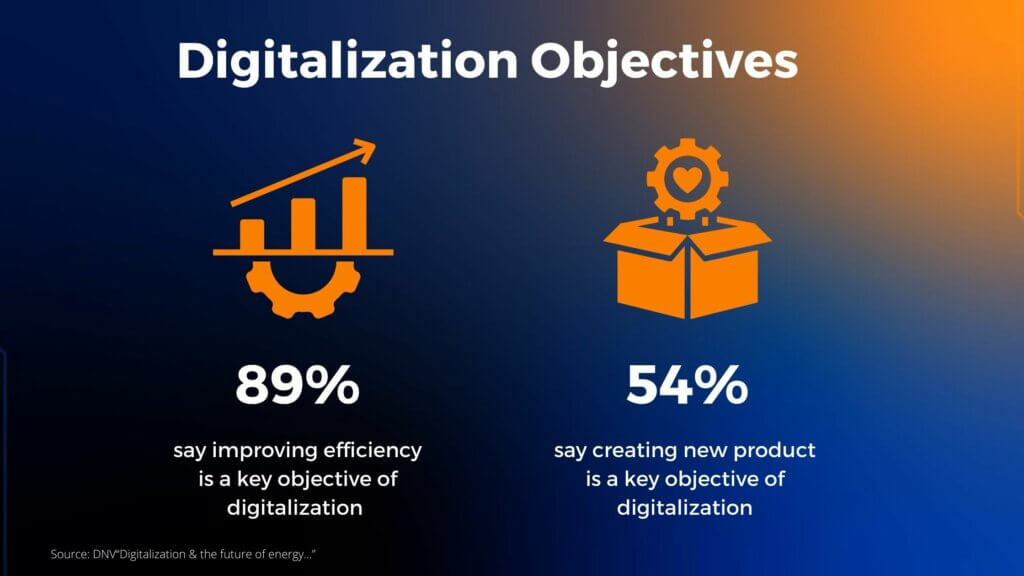 When looking for leaders in the digitization of the energy sector, it is worth taking a look at Spain, which is considered an excellent example of the optimization of renewable energy management. Digital technology allowed for the centralized management of Red Electrica distributed renewable generation.

In 2016, the company launched an ambitious digital transformation plan and is now finalizing its digitization plan at the end of 2021. In this process, 1.2 billion euros.

Endesa became the first utility company in the world to be 100% cloud-based, which allowed them greater flexibility and enormous data processing and storage capabilities. The cloud offers us, among other things, remote access from anywhere and guarantees the latest data.

Their analytical methodology called “next-level reporting” allows them to create scenarios and predict threats before they actually appear. These scenarios were written for all business areas: security, fraud detection, maintenance for manufacturing and distribution, and tools for all levels of the commercial sector. Machine learning to identify fraud cases is a perfect example of how digital transplantation translates into everyday life at Endesa. Endesa was a pioneer in this case when it comes to using data predictability to detect fraud and abuse cases.

Digitization is not only technology and big data. The success of digital transformation does not only depend on the implementation of ready-made solutions. Research from. McKinsey Global Survey shows that companies are successful in transformation when they have specific leaders oriented towards digital technology. It turns out once again that the human being is the main driver of change and that the company’s success, its development, and success in everyday fights with competition, depend on its ability to use modern technology.

10 problems to avoid in the SaaS product company in 2022

The Saas market is evolving in a very dynamic way. Digital transformation is a fact and we start to talk about it already by using the past tense. Recent...

FinTech – the safety of financial apps and systems

One may see fintech as a revolutionary solution in the financial market. How about...

AI in programming and app development.

Risks and rewards for the future of...